While I love numbers and “statistics” in the baseball sense of the word, I must admit that I never sat through a class in college that I considered more worthless than Statistics. I never considered a regression analysis too hard to regurgitate on a test, but the necessity of it escaped me. Possibly it was my instructor who failed to adequately explain to me when such information could ever be worth the money my parents were paying for me to receive it, or possibly it was me who failed to pay close enough attention to him when he tried to do so (the latter is probably more likely than the former), but I could not in my wildest dreams ever foresee a time when that knowledge would have practical application to my personal or professional life.

Following college, I’m not sure the concepts I learned in statistics ever reentered my mind until I was a young lawyer and learned that Federal banking regulators were using regression analyses to decide whether or not banks were complying with Fair Lending laws. Evidently, they did not have the same college Statistics experience I did since they not only found that information useful but also considered it worthy of reliance as substantiation of the ultimate “Scarlet Letter” in banking known as discrimination. While I still consider that point debatable and often believe there are parallels between Fair Lending enforcement and “The Crucible” (I am full of college curriculum references today), I will say that age and Microsoft Excel have at least allowed me to find interesting uses for Statistics, even though their reliance may still be debatable.

For example, there is a function in Excel that allows you to calculate the correlation between one set of data points and another set of data points. You statisticians and regulators out there already know that the calculation of “r,” or “Person’s correlation coefficient,” is a measure of the linear correlation between two variables. This measurement is reflected through a value between -1 and 1, with a result of 1 meaning that the two data points are perfectly correlated in a positive way (i.e., as x moves, so does y), and a result of -1 meaning that the two data points are negatively correlated (i.e., as x moves up, so does y move down). A result of 0 implies that there is no linear relationship at all between the two data points, and a correlation of 0.80 and above is generally considered as statistically significant enough to indicate a linear relationship.

“My head is hurting,” you say. “I am not a regulator, so I can’t possibly see what any of this has to do with banking.” Well, as I implied above, Microsoft Excel has a formula function that allows you to calculate “r” for different data points. When I realized that, I thought it might be fun (or at least interesting) to analyze the linear relationships between varying bank performance ratios and the typical bank profitability ratios (i.e., ROA, Pretax ROA, and ROE) in order to see, for example, if a higher net interest margin for banks studied could be related to higher profitability for banks during a given period of time.      By using the same peer group data from the last five years of UBPR reports that I have referred to in all of my previous articles, I decided to try this. What I found was even more interesting than I thought it would be.

First of all, many of the bank performance ratios and statistics that are often presumed to be primary drivers of profitability appeared to have little correlation to ROA, ROE, or pretax ROA over the last five years. For example, consistent with my earlier articles questioning the benefits of size for banks, the average total assets for all peer groups between 2010 and 2014 had an “r” of 0.21 to ROA, 0.19 to ROE, and 0.32 to pretax ROA. If 0.80 is the standard for a statistically significant correlation, then total assets seems barely correlated to profitability at all. Another commonly held position is that a bank’s loans to assets drives profitability since it obviously increases the bank’s earning asset yields; however, loans to assets had a 0.01 r to pretax ROA, a 0 r to ROE, and actually a -.05 r to ROA, indicating no correlation to a slightly negative one.

So if size, loans, and Net Interest Margin were not correlated with bank profitability over the last five years, what was? I guess it shouldn’t be a surprise after the research I documented in my earlier articles that ratios dealing with a bank’s ability to control costs exhibited the strongest correlations during the period studied. For example, the ratio of other expenses to total assets was very strongly and negatively correlated with ROA, ROE, and pretax ROA (-0.86, -0.86, and -.84, respectively), indicating that profitability often went down as this ratio increased. Efficiency ratio exhibited the next strongest negative correlation, with an “r” of -0.83 to ROA,   -0.83 to ROE, and -0.84 to pretax ROA. A close third was bank Burden (i.e., non-interest expense less non-interest income), which had “r’s” to ROA, ROE, and pretax ROA of -0.77, -0.74, and -0.81, respectively. Notice that each of these “expense” centric measurements had correlation coefficients with negative correlations that were arguably statistically significant. 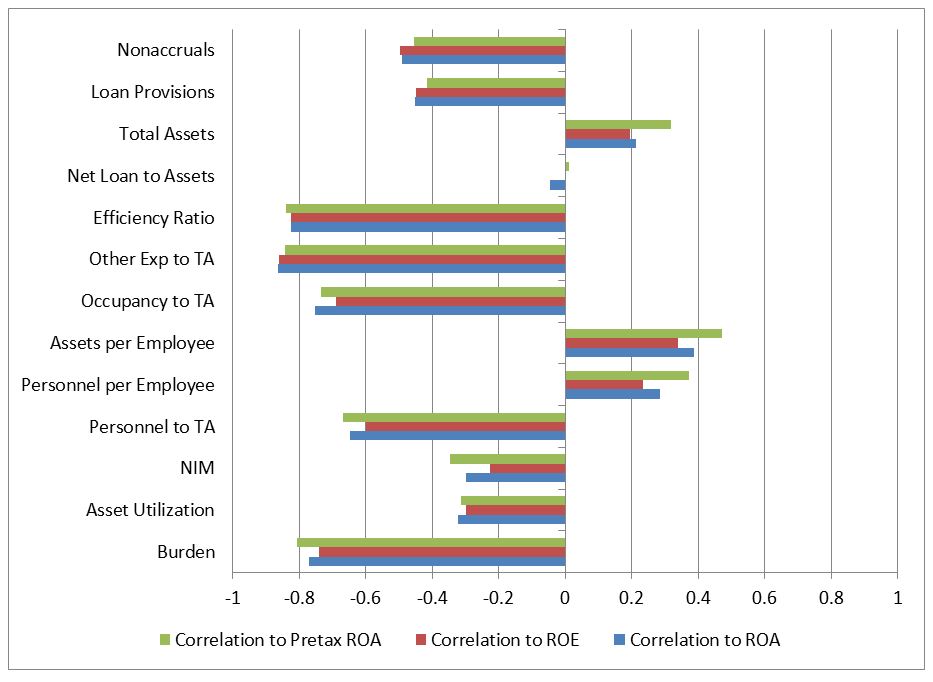 So what can we take from this, other than a bad reminder of college statistics? Probably nothing in and of itself since your college professors would tell you that “r” was never meant to predict causal relationships but instead merely indicate how two sets of data points may be linearly related; however, considering the evidence from my past articles, I’m not sure we can completely ignore it either. If nothing else, it seems to be further evidence of the fact that, at least during the last five years, a bank’s ability to grow or produce interest income was not nearly as important to the return their shareholders received as was the costs they incurred generating that extra dollar. The latter definitely seems like it was more harmful than the former was helpful. Would it be any different in an alternate part of the interest rate or economic cycle, though? After all, the last five years were most definitely unique in that historically low interest rates perpetuated through a historically tepid recovery. We will consider that point in my next article.