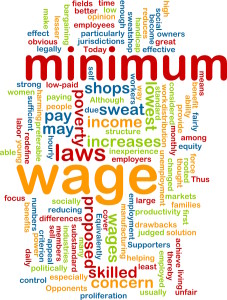 Following through on a promise made in his State of the Union Address, President Barack Obama formally signed an Executive Order on February 12, 2014, establishing a separate minimum wage for employees of federal contract workers.  Effective January 1, 2015, the minimum wage for most Federal contractor employees shall be set at $10.10 per hour.  “Tipped workers,” employed pursuant to a Federal contract, are to be paid a minimum of $4.90 per hour, with incremental increases to begin in 2016.  Additionally, beginning January 1, 2016, the Executive Order allows for the Secretary of Labor to modify this separate minimum wage (after providing at least 90 days’ notice of such modification).  The Executive Order expressly incorporates existing definitions and regulations under the Fair Labor Standards Act (29 U.S.C. 201 et seq.), the Davis Bacon Act (40 U.S.C. 3141 et seq.) and the Service Contract Act (40 U.S.C. 6701 et. seq.).

While this increase does not impact employers of non-governmental contractors, President Obama stated that his ultimate goal is for passage of legislation increasing the federal minimum wage for allworkers to levels commensurate with this Executive Order.