We all know the story and ultimate conclusion, right? Commercial banking is becoming more complex, regulations are multiplying exponentially each passing day, commercial activity and related loans are migrating more and more to metropolitan areas, so therefore small town, community banks are quickly becoming a thing of the past. They simply can’t keep up. Not only are they losing loans to banks in faster growing, more populated areas, but they also are struggling to hire sufficient staff to comply with regulation, much less chase loans. They just don’t have the economies of scale or markets to support the inevitable overhead explosion and attract the top talent to their slow growing, rural economies. Sadly, their days are numbered. Within a decade or two, rural community banks with assets less than $1 billion will go the way of the dinosaur, victims of that terrible meteor named Dodd-Frank.

This must be the truth, right? Everything we learned in macroeconomics demands it. Bigger banks have more economies of scale to support the rising fixed costs associated with commercial banking, and smaller banks will eventually tap out. Metropolitan banks have more access to capital, loans, and growing deposit bases and therefore have an inherent advantage over their rural cousin the country bank. As a former CFO and COO of a rural, community bank, I know I bought it hook, line, and sinker. Looking at growing overhead, shrinking loans, and aging management, I was convinced this storyline was the only possible one. Heck, it’s a big reason why I decided a future in community banking was not for me, opting instead to return to the much more stable world of practicing law (note the presence of my tongue which is firmly implanted in my cheek).

The problem is, five years after the end of the great recession, the bank statistics published in the Uniform Bank Performance Reports (“UBPR”) by the Federal Financial Institutions Examination Council (“FFIEC”) simply don’t support this idea that small town community banks are dead, or that they are even dying. As a matter of fact, there is some argument to the contrary, at least in certain contexts.

In reaching this conclusion, I examined the UPBR average peer group data from the last five years for each of the 15 major peer groups for insured commercial banks. I excluded the peer groups related to De Novo banks created in the last five years which had the potential to skew the analysis due to the unique challenges faced by De Novo institutions. These 15 different peer groups, which included 5,619 banks, are delineated as follows:

I first stumbled upon the truths presented by the UBPR while I was analyzing the performance data of a client. With the same prejudices in mind that I stated in the opening two paragraphs, I decided to compare that bank’s data to statistics for banks in “larger” peer groups. What I discovered astonished me and interested me to the point that I decided to dig deeper. Not only did the bank’s statistics compare more favorable to the data of “larger” peer groups than it did to statistics of its own peer group, but the average numbers for the bank’s peer group 7, which is assigned to relatively smaller, rural banks, seemed to soar well above some of its larger, more metropolitan cousins.

Peer group 7, which, as mentioned above, is reserved for banks between $100 million and $300 million in assets that are located in a non-metropolitan area and have 2 or fewer branches, averaged the highest Return on Equity (“ROE”) (i.e., 10.47%) and Return on Assets (“ROA”) (i.e., 1.16%) of any peer group over the last five years. What about the next highest ROE and ROA? Well those belonged to “rural, community” banks as well. Peer Group 11 (i.e., $50 million to $100 million, 2 or fewer branches, and non-metropolitan area) boasted the next highest ROA of 0.99%, and Peer Group 5 (i.e., $100 million to $300 million, 3 or more branches, and non-metropolitan area) claimed second place in ROE with 9.12%. Third place in each category also belonged to Peer Groups 11 and 5, just in reverse with respect to the category. Peer Group 1, the peer group for the nation’s largest banks (i.e., more than $3 billion in assets), doesn’t show up on either list until you look down to fourth place, where it finished with an average ROE of 7.79% and an average ROA of 0.88% over the last five years. In my next post, we will start to examine what could be the explanation of this and what secrets it could reveal to you regarding operating a community bank in this challenging environment. 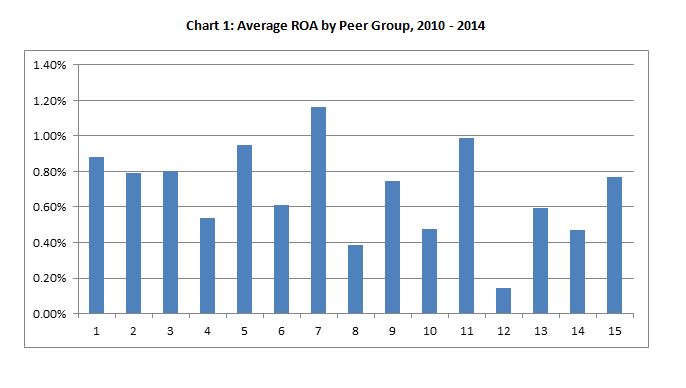 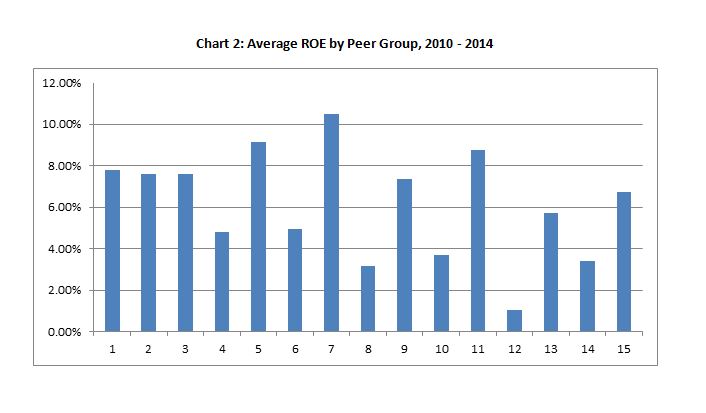