Following a prepared agenda, items considered were as follows:

The Board approved a Modification of Section 401 Water Quality Certification (No. WQC 2012071) for Drying Facility Assets Holding, LLC, Picayune Frac Plant, located in Pearl River County, MS. The modification will alter permittee’s mitigation plan to allow for off-site mitigation, rather than on-site. MDEQ staff took no position on whether the Board should grant the proposed modification. The Modification was approved on the condition that the wetlands designated for enhancement and restoration are left within the perpetual conservation easement.

Mr. Roy Furrh, MDEQ General Counsel, advised the Board that due to legislation, passed in the 2016 Regular Session of the Mississippi Legislature, that places fees collected by state agencies into the state’s general fund, the Office of the Attorney General would no longer be able to provide hearing officers to MDEQ. Mr. Furrh stated that a list of former assistant attorneys general and private practitioners was being compiled to serve as hearing officers.

Twenty- seven attorneys with Brunini, Grantham, Grower & Hewes, PLLC, were recently selected by their peers for inclusion in the 2017 edition of The Best Lawyers in America. Brunini lawyers were recognized in the following categories:

In addition to the above selections, the following attorneys were chosen as the Lawyer of the Year:

The Best Lawyers lists, representing over 125 specialties in all 50 states and Washington D.C., are compiled through an exhaustive peer-review survey in which thousands of the top lawyers in the U.S. confidentially evaluate their professional peers. Since it was first published in 1983, Best Lawyers has become universally regarded as a reliable guide to legal excellence. Because Best Lawyers is based on an exhaustive peer-review survey in which more than 36,000 leading attorneys cast almost 4.4 million votes on the legal abilities of other lawyers in their practice areas and because lawyers are not required or allowed to pay a fee to be listed, inclusion in Best Lawyers is considered a true honor.

On May 18, 2016, Trey Jones, Taylor McNeel, and William Drinkwater obtained summary judgment for one of the firm’s bank clients in a significant case which raised numerous important issues in the area of wrongful foreclosure claims. The plaintiff alleged that the Bank wrongfully foreclosed on his home by failing to comply with the terms of the deed of trust, failing to comply with unspecified Department of Veterans Affairs regulations and by taking action contrary to a forbearance agreement. Plaintiff sought unspecified compensatory and punitive damages. Following extensive briefing and oral argument, the Harrison County Circuit Court determined, among other things, that plaintiff had failed to prove recoverable damages, that the VA’s request for extension did not create a duty for the Bank to forbear, that a borrower must object at the foreclosure sale prior to bringing a wrongful foreclosure lawsuit and that once a borrower fails to make timely loan payments, she cannot sustain a claim for breach of the loan agreement. Accordingly, the Circuit Court granted the Bank summary judgment on all of the claims asserted in the complaint and dismissed the case with prejudice. 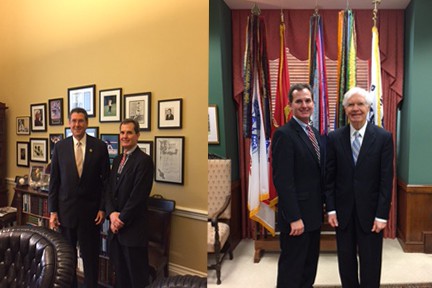 Brunini’s Patrick McDowell represented the Mississippi Chapter of the Federal Bar Association at the FBA’s Annual Leadership Seminar and Capitol Hill Day in Washington, D.C. on May 19-21, 2016.  Shown here are McDowell meeting with Sen. Thad Cochran and with Rep. Gregg Harper.

Jim Halford represents energy, pipeline, and gas, telecommunications and electric utility clients in the Gulf South region with the Brunini Firm. He serves on the Firm’s four-person Board of Directors and is past Chairman of the Firm’s Regulatory Department.

Watts Ueltschey has spent most of his career representing companies and individuals in the energy sector, both upstream and mid-stream. He was named the 2015 Attorney of the Year by the Mississippi Business Journal.

On May 17, 2016, Chris Fontan discussed Diversity in the Changing Workplace at the 21st Annual Mississippi Human Resource Conference and Expo held at the Beau Rivage in Biloxi, Mississippi.

Materials used during the discussion may be viewed here.

The 2016 edition of Chambers USA, which lists leading law firms and individual lawyers in an extensive range of practice areas, jointly awarded high rankings to ten Brunini attorneys and five of the firm’s practice areas.

Each year, Chambers USA conducts thousands of interviews and surveys with lawyers and their clients, as well as analyzes its own database resources, to determine rankings for top law firms and individual attorneys. The qualities on which rankings are assessed include technical legal ability, professional conduct, client service, commercial astuteness, diligence, commitment and other qualities valued by clients.

“The Brunini firm is truly honored to have its practice groups and individual lawyers recognized by our clients as among the best in Mississippi through one of the nation’s most respected legal directories,” said Sam Kelly, Chairman of the firm’s Board of Directors. “Our commitment to client service and a long history of legal excellence are hallmarks that set us apart in Mississippi, and those are good reasons to earn the respect of business leaders and peers.”

A collective list of the ten Brunini attorneys recognized as among the best in their fields in Mississippi by Chambers USA include:

On April 25, 2016 Energy Policy Institute announced that Curt Hébert would be their Keynote Speaker for the 2016 Energy Policy Research Conference to be held September 8-9, 2016 at La Fonda on the Plaza in Santa Fe, New Mexico.  He will speak on cyber security and protecting the grid.  For more information on the conference click here.

On February 18, 2016, the United States Court of Appeals for the Fifth Circuit affirmed the United States District Court of Louisiana’s award of summary judgment to the firm’s clients in a civil RICO action accusing the clients and others of alleged racketeering activities in connection with the awarding of debris removal and clean-up contract work in Louisiana following Hurricane Katrina.  The District Court entered summary judgment in the clients’ favor on March 13, 2015, and plaintiffs appealed.  The Court of Appeals heard oral argument on February 2, 2016, and affirmed for the clients soon after on February 18, 2016.  The clients were represented by David Kaufman, Patrick McDowell (argued), and Benje Bailey.