The Section provides educational programs, publications, and other services, and keeps members aware of developing trends, current court decisions, legislative initiatives, and regulatory programs. Milner previously served as Chair-Elect and Vice Chair of the Section, in addition to other leadership positions.

“Serving as Chair of the Section is truly an honor for me, and I am proud to lead the nation’s premier forum for environmental, energy, and resources lawyers,” Milner said. “I am also truly grateful for the support of my colleagues in the Section and in my law firm as I assume this new role.”

On a national level, Milner has practiced environmental law for more than 35 years. His practice includes many facets of environmental law and litigation, including federal and state cases involving the Clean Water Act, Clean Air Act, Hazardous Waste laws, Superfund, brownfields redevelopment, and energy development. His clients include industrial corporations, commercial entities, and municipalities. He has been recognized as a leader in environmental law by a number of lawyer rating organizations, including Chambers USA and Best Lawyers in America.  He is a Fellow in the American College of Environmental Lawyers. 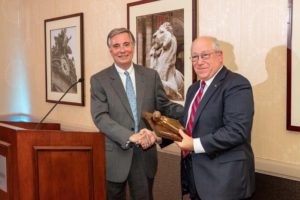 Pictured: (From L to R) John Milner with Immediate Past Chair, Seth Davis.

32 of Brunini’s attorneys have been recognized in the 2018 Edition of  Best Lawyers in America with six of those being recognized as Lawyer of the Year.

The Brunini Attorneys named “Lawyer of the Year” are as follows:

In May 2017, a federal district court judge from the Eastern District of Pennsylvania ruled that the Americans with Disabilities Act (“ADA”) may cover “gender dysphoria,” as well as other conditions related to “gender identity disorder.” Though seen as a departure from previously established law, this ruling could open the door to expanding employment protections to some transgender individuals under the ADA.

What is “Gender Dysphoria”

By now, the term “transgender” is a common term in our national vocabulary.  “Transgender” is an umbrella term for people whose gender identity and/or gender expression is different from cultural expectations placed on them due to their biologically-assigned birth gender. An issue more and more transgender individuals are seeking treatment for is known as “gender dysphoria.” The Human Rights Campaign defines “gender dysphoria” as “clinically significant distress caused when a person’s biologically-assigned birth gender is not the same, or does not match, the gender with which that person “identifies.”

Historical Treatment of LGBTQ Issues under the ADA

Historically, the ADA has not recognized LGBTQ-related conditions as covered disabilities. Specifically, Section 12211 of the ADA contains a number of exclusions—including “homosexuality” and “bisexuality” on the grounds that they are not “impairments” at all. The ADA also excludes “transvestism, transsexualism, pedophilia, exhibitionism, voyeurism, gender identity disorders not resulting from physical impairments, or other sexual behavior disorders; compulsive gambling, kleptomania, or pyromania; or psychoactive substance use disorders resulting from current illegal use of drugs.”

“Transsexualism” and “gender identity disorders not resulting from physical impairments” seem to be 1990s-era terms for the state of being what we call today “transgender.” And based on the other conditions that “transsexualism” and “gender identity disorders” are grouped with, it appears that in 1990, Congress considered these to be “anti-social” behaviors. Other “anti-social” behaviors not covered under the ADA include peeping, child molestation, compulsive stealing, and compulsively setting things on fire.

On August 15, 2014, a transgender woman filed Title VII and ADA claims against her former employer, claiming that she had suffered disability discrimination and retaliation based on her “gender dysphoria.” In her case (styled Blatt v. Cabela’s Retail, Inc., No. 5:14-cv-04822-JLS), the plaintiff alleged that her gender dysphoria was characterized by clinically significant stress and substantially limited one or more of her major life activities, including but not limited to, interacting with others, reproducing, and social and occupational functions.

The employer sought early dismissal of the ADA claims on the grounds that gender identity disorders are expressly excluded from coverage under Section 12211 of the ADA. In response, the plaintiff argued that excluding gender dysphoria from ADA protection violated the Equal Protection Clause of the Fourteenth Amendment—a particularly novel argument in light of recent U.S. Supreme Court, including the 2015 gay marriage opinion (Obergefell v. Hodges, 135 S. Ct. 2584 (2015)). However, the district court judge sidestepped this Equal Protection issue altogether.

Instead, the judge ruled that a plaintiff’s “gender dysphoria” could be an ADA-protected disability—despite the language in Section 12211 excluding “gender identity disorders not resulting from physical impairments”— if the dysphoria caused “clinically significant stress and other impairments.” In reaching its holding, the court noted that two categories of conditions are explicitly excluded from protection under the ADA: (1) non-disabling conditions concerning sexual orientation and identity (e.g., homosexuality and bisexuality), and (2) conditions associated with harmful or illegal conduct (e.g., pedophilia and kleptomania). The court then narrowly interpreted these exceptions and found that the ADA does not exclude protection of “conditions that are actually disabling but that are not associated with harmful or illegal conduct” – such as the gender dysphoria affecting the plaintiff.

Using the Blatt court’s rationale, a transgender individual with “gender dysphoria” would be no different.  For example, clinical depression caused by discrimination against an individual because he/she was transgender would clearly qualify as an ADA-protected condition under the rationale used in Blatt. Conversely, the individual’s transgender status—in and of itself—would not be entitled to ADA protection, as that is clearly excluded under Section 12211.

The court also noted that its interpretation of the ADA is consistent with the Third Circuit’s mandate that the ADA is “a remedial statute, designed to eliminate discrimination against the disabled in all facets of society. . . [and] must be broadly construed to effectuate its purposes.” Thus, the judge wrote any exceptions in the ADA “should be read narrowly in order to permit the statute to achieve a broad reach.”

This is yet another case in a recent wave of litigation concerning protections for LGBTQ individuals under the federal employment statutes. This ADA challenge represents a different approach to gender equity litigation that will warrant close monitoring to see how it impacts the development of jurisprudence—especially since it remains to be seen if the defendant will appeal the ruling, or if other jurisdictions will apply the Blatt rationale. In the meantime, employers should be mindful of their duties under the ADA to accommodate disabling impairments, even if the underlying condition is arguably not covered by the ADA.

The 2017 edition of Chambers USA, which lists leading law firms and individual lawyers in an extensive range of practice areas, jointly awarded high rankings to ten Brunini attorneys and five of the firm’s practice areas.

A collective list of the ten Brunini attorneys recognized as among the best in their fields in Mississippi by Chambers USA include:

Chris Fontan, current Member at Large for the Mississippi Bar’s Labor &  Employment Section, presented during it’s Annual CLE Service.  The  materials from his presentation may be viewed here.

During its May meeting held on May 9, 2017, Chris Fontan presented “Diversity in the Changing Workplace” to the Golden Triangle Human Resources Association.  The presentation may be viewed here.

On March 15, 2017, a jury in the District Court for the Northern District of Mississippi returned a defense verdict in favor of Peco Foods, Inc. and against 55 plaintiffs. The underlying lawsuit involved nuisance and negligence-based claims brought by residents of the Egypt, Mississippi community related to Peco Foods’ contracts with two broiler chicken farms in the area. Specifically, the residents complained that the farms were a nuisance because they allegedly produced excessive odors, flies, and truck traffic. Plaintiffs also claimed that Peco Foods was negligent in contracting and continuing its contractual relationship with the farms. After a 13-day trial that involved 70 witnesses, the jury found that none of the 55 plaintiffs had established their claims against Peco Foods and returned a defense verdict. Judge Michael Mills presided over the trial. During closing argument, the Plaintiffs’ counsel asked the jury to award $11 million in monetary damages.

Watts Ueltschey was a featured speaker at the March meeting of the Mississippi Association of Petroleum Landmen on March 13, 2017.  His presentation discussed Inheritance by Illegitimates in Mississippi and may be viewed here.

Benchmark Litigation has named the Brunini firm Mississippi’s only “Firm of the Year” for 2017.  This is the second consecutive year for Brunini to receive this honor.  Patrick McDowell accepted the award for the firm at the Benchmark Litigation U.S. Awards Dinner in New York City on February 16.

Benchmark Litigation focuses exclusively on litigation in the United States.  Award winners are determined through extensive interviews of the nation’s leading private practice lawyers and in-house counsel to identify the very best litigators and law firms in each jurisdiction.  The Brunini firm is proud to continue to be recognized among the country’s most distinguished law firms.

David Kaufman was elected President of the Mississippi Chapter of the American Board of Trial Advocates at its annual meeting held in Jackson on February 11, 2017. ABOTA is an invitation-only national association of experienced trial lawyers and judges dedicated to the preservation and promotion of the Seventh Amendment to the U.S. Constitution, which guarantees the right to civil jury trials. ABOTA’s primary goal is to educate the American public about the history and value of the right to trial by jury and is dedicated to elevating the standards of integrity, honor and courtesy in the legal profession. Founded in 1958, ABOTA boasts a membership of more than 7,600 experienced attorneys representing both the plaintiff and defense bars in civil cases and who are spread among 95 chapters located in all 50 states and the District of Columbia.

Brunini’s Kaufman has been recognized by Best Lawyers in America® for Bet-the-Company Litigation, Business Litigation, Securities Litigation, and Personal Injury Litigation. Chambers USA has included him among America’s Leading Lawyers in Business Litigation, and Mid-South Super Lawyers has named Kaufman one of its top 50 lawyers in Mississippi for business litigation. Benchmark Litigation has named him a Local Litigation Star, and The Mississippi Business Journal recognized Kaufman as a Leader in the Law for 2011. He is also a Fellow of the American College of Trial Lawyers and an Associate and former National Director of the American Board of Trial Advocates.